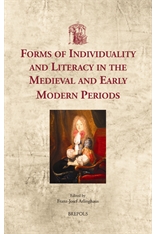 Through case studies of a broad variety of medieval and early modern sources, this volume discusses whether the roots of modern notions of individuality can be found in pre-modern Europe.

‘Individuality’ is one of the central categories of modern society. Can the roots of modern individuality be found in pre-modern times? Or is our way of thinking about ourselves a very recent phenomenon? This book takes a theoretical approach to the problem, derived from Niklas Luhmann’s system theory, in which different forms of individuality are linked to different structures of society in modern and pre-modern times.

The papers in this volume approach this problem by discussing a broad variety of medieval and early modern sources, including charters and seals, letters, and naming-practices in a late medieval town. Self-representation is also considered, in ‘housebooks’ and drawings. Textual studies include autobiography in German Humanism, and concepts of individuality and gender in late medieval literary texts.

Mareike Böth, “Bodily Practices as an Expression of ‘Individuality’ in the Letters of Liselotte von der Pfalz (1652-1722)”

Eva Kormann, “Hetero-Reference and Heterology: Autobiographical Writing, Individuality, and Gender on the Threshold of the Modern Period”

Christof Rolker, “Me, Myself, and My Name: Naming and Identity in the Late Middle Ages”

Heike Schlie, “Body and Time: The Representation of the Naked and Clothed Self in Religious, Social, and Cosmological Orders (Matthäus Schwarz, 1497-1574)”