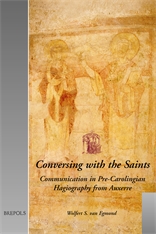 Early medieval hagiographical texts abound with vivid descriptions of acts of communication. Such descriptions in the hagiography written in the diocese of Auxerre during the Merovingian period are studied here in an attempt to establish the status of the written word vis-à-vis other means of communication, such as the spoken word or rituals. For this purpose, the dating of each source is reconsidered. The texts were written within the clerical community of Auxerre and mostly relate in some way to Germanus, the most renowned bishop of Auxerre (first half of the fifth century). Although the Vita Germani by Constantius was not written in Auxerre nor for an Auxerrois audience, it is included in the analysis, since it has exerted a profound influence on the later hagiographical narratives produced in the diocese. This study demonstrates that the authors of these texts were very much aware of the limitations of the written word as well as of the advantages and importance of non-written communication.

Hagiography and historiography: a problem of genre – The Carolingian authors – Alagus and Rainogala – Heiric – Relationships between the Carolingian texts

Chapter 2. Constantius’ Vita Germani: An Author and His Text

Chapter 3. Communication in the Vita Germani

Chapter 5. Communication in the Merovingian Texts Education, literacy and Holy Scripture – Exorcisms and other communication with the supernatural – Gesture and ritual – Early medieval liturgy and its sources – The marriage of Amator and Martha – Baptism – Conclusion