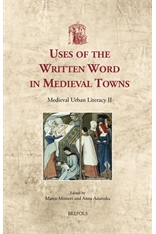 In medieval towns, examples of personal writing appear more prevalent than in non-urban spaces. Certain urban milieus participating in written culture, however, have been the focus of more scholarship than others. Considering the variety among town dwellers, we may assume that literacy skills differed from one social group to another. This raises several questions: Did attitudes towards the written word result from an experience of the urban educational system? On which levels, and in which registers, did different groups of people have access to writing? The need and the usefulness of written texts may not have been the same for communities and for individuals. In this volume we will concentrate on the town dwellers’ personal documents. These documents include practical uses of writing by individuals for their own professional and religious ends, including testaments and correspondence. Besides written records belonging to the domain of ‘pragmatic literacy’, other kinds of texts were also produced in town. Was there any connection between practical literacy, literary (and historical) creativity and book production?

Part I: Alphabets and Languages: Multi-Ethnic and Multilingual Urban Literacies

Anna Adamska, “‘Away with the Germans and Their Language!’: Linguistic Conflict and Urban Records in Early Fourteenth-Century Cracow”

J. Antoni Iglesias, “Books and Booksellers in the Cities of the Crown of Aragon: The Example of Barcelona”

Iva Kurelac, “Writing about the Past of a Country from the Communal Viewpoint: Features, Models and Examples in Croatian Humanist Historiography”

Part IV: Reading, Seeing, Hearing: The Place of Writing in the System of Urban Communication

Dušan Zupka, “Communication in a Town: Urban Rituals and Literacy in the Medieval Kingdom of Hungary”