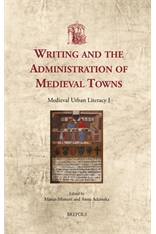 In medieval towns, written statements of law and administration appear more prevalent than in non-urban spaces. Certain urban milieus participating in written culture, however, have been the focus of more scholarship than others. Considering the variety among town dwellers, we may assume that literacy skills differed from one social group to another. This raises several questions: Did attitudes towards the written word result from an experience of the urban educational system? On which levels, and in which registers, did different groups of people have access to writing? The need and the usefulness of written texts may not have been the same for communities and for individuals. In this volume we concentrate on the institutional written records that were most indispensable to communal order, including collections of written law, charters of liberties, and municipal registers.

Geertrui van Synghel, “The Use of Records in Medieval Towns: The Case of ’s-Hertogenbosch (Brabant) ”

Hannes Obermair, “The Use of Records in Medieval Towns: The Case of Bolzano, South Tyrol”

José Miguel López-Villalba, “Urban Chanceries in the Kingdom of Castile in the Late Middle Ages”

Katalin Szende, “Towns and the Written Word in Medieval Hungary”

Agnieszka Bartoszewicz, “Urban Literacy in Small Polish Towns and the Process of ‘Modernisation’ of Society in the Later Middle Ages”

Andreas Litschel, “Writing and Social Evidence ‘Before the Archives’: Revealing and Concealing the Written in Late Medieval Lüneburg”

Hannes Lowagie, “The Political Implications of Urban Archival Documents in the Late Medieval Flemish Cities: The Example of the Diary of Ghent”

Bastian Walter, “A Technique to Ensure Safety: The Zedulae inclusae of Strasbourg, Bern and Basel during the Burgundian Wars (1468-1477)”

Branka Grbavac, “The Professsional Formation of Public Notaries in Dalmatia from the Second Half of the Twelfth to the End of the Fourteenth Century”