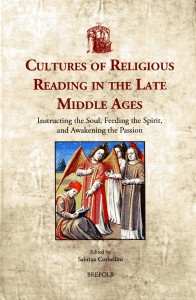 “Read often, learn all that you can. Let sleep overcome you, the roll still in your hands: when your head falls, let it be on the sacred page” (St Jerome, 384 AD).

With these words, the Church Father Jerome exhorted the young Eustochium to find on the sacred page the spiritual nourishment that would give her strength to live a life of chastity and to keep her monastic vows. His call to read does not stand alone. Books and reading have always played a pivotal role in early and medieval Christianity, often defined as a ‘religion of the book’.

A second important stage in the development of the ‘religion of the book’ can be attested in the late Middle Ages, when religious reading was no longer the exclusive right of men and women living in solitude and concentrating on prayer and meditation. Changes in the religious landscape and the birth of new religious movements transformed the medieval town into a privileged area of religious activity. Increasing literacy opened the door to a new and wider public of lay readers. This seminal transformation in the late medieval cultural horizon saw the growing importance of the vernacular, the cultural and religious emancipation of the laity, and the increasing participation of lay people in religious life and activities.

This volume presents a new, interdisciplinary approach to religious reading and reading techniques in a lay environment within the late medieval textual, social, and cultural transformations.

1. Latin and Vernacular – Orthodoxy and Heterodoxy

2. Print and Public: The Impact of Printing on the Dissemination of Orthodoxy

Koen Goudriaan, “The Church and the Market: Vernacular Religious Works and the Early Printing Press in the Low Countries,1477-1540”

Suzan Folkerts, “The Cloister or the City? The Appropriation of the New Testament by Lay Readers in an Urban Setting”

4. Religious and Sacred Texts in the Vernacular: Methodological Aspects of a Social History of Reading