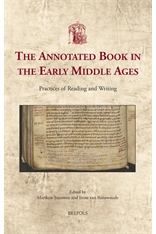 Annotations in modern books are a phenomenon that often causes disapproval: we are not supposed to draw, doodle, underline or highlight in our books. We are brought up with the idea that books are too valuable to do this; future readers will have to use these books, and they are not helped with our annotations or markings. But if we go back in time to the period of the handwritten book, this is completely different.

In many medieval manuscripts, pages are filled with annotations around the text and in between the lines. In some cases, the “white area” around the text is even laid out to contain extra text, pricked and ruled for the purpose. Just as footnotes are an approved and standard part of the modern academic book, so are the flyleaves, margins and interlinear spaces of many medieval manuscripts an invitation to add extra text.

In this volume, we analyze this phenomenon for the early medieval period. We treat the manuscripts as mirrors of the medieval minds who created them, reflecting their interests, their choices, their practices. We ask ourselves whether the phenomenon of annotating manuscripts adheres to certain rules and patterns. For example, are there certain genres in which the making of annotations seems to be more appropriate or common than in others? Are there genres in which annotating is “not done”? Are there certain monastic centres in which annotating practices flourish, and from which they spread? Do the annotators use specific techniques, perhaps specific to their scribal communities or schools? What do they seek to accomplish with their annotations? How do these techniques develop over time, and what are regional differences?

Section I: Scholars and Their Books: Practices and Methods of Annotating

Mariken Teeuwen, “Voices from the Edge: Annotating Books in the Carolingian Period”

Warren Pezé, “The Making of the De praedestinatione of Ratramnus of Corbie (Including the Identification of a New Personal Manuscript)”

Giacomo Vignodelli, “The Making of a Tenth-Century Self-Commentary: The Glosses to Atto of Vercelli’s Perpendiculum and Their Sources”

Franck Cinato, “The Earliest Anonymous Exposition of Priscian: Two Manuscripts and Their Glosses”

Jesse Keskiaho, “The Annotation of Patristic Texts as Curatorial Activity? The Case of Marginalia to Augustine’s De Genesi ad litteram in Late Antiquity and the Middle Ages”

Patrizia Carmassi, “Theological Issues and Traces of Controversies in Manuscripts Transmitting Works of the Church Fathers”

David Ganz, “The Search for Glossed Clauses: An Autobiographical Account of a Corbie Study”