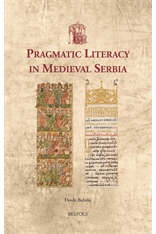 Examining the significance and uses of written documents in medieval Serbian society, for the very first time the manifestations of everyday literacy are revealed in the area where the East and the West intersect in southeastern Europe.

The interweaving of Latin and Byzantine influences shaped the culture of literacy in medieval Serbia. Unprecedented in the field, this study aims to show that, even if only about 1000 Serbian medieval documents are preserved, this does not mean that little had been written. An exploration of the use of written documents in commercial, legal, and private relations in late medieval Serbia constitutes the basic scope of the research. It focuses on the documents’ fate and on their social roles from the moment they were issued or submitted to their beneficiaries. The making of charters – by rulers, the Church, the aristocracy, towns, and public notaries – is analysed, as are the main fields of the use of the written word – evidentiary procedure, diplomacy, and correspondence. The citation of individual examples of pragmatic literacy allows us to give an approximate idea of how widespread the belief in the power of the written word really was. Even though the ways in which documentary literacy manifested itself in late medieval Serbia display certain idiosyncrasies, the growth in the use and reputation of written documents suggests that the Serbian case was not all that unlike the written customs and practices elsewhere in medieval Europe.

Chapter 3. Characteristics of This Research

Chapter 4. Basic Characteristics of the Documentary Legacy of the Serbian Middle Ages

Part Three: Domains of the Use of the Written Word

Hagiographies, Epistolaries, Drafts of Beginnings of Letters, Short Messages (Several Notes on Sources) — Private Correspondence of the Ruler’s Family — The Ruler and the Church: A Symphony in Correspondence — Church, Nobles, Citizens, Private Persons …

Chapter 13. The Probative Force of Documents and Their Role in Judicial Proceedings

Means of Evidence: The Basic Purpose — The Role of the Written Word in Legal Procedures — Probative Force and the Use of Serbian Documents in the Maritime Communes and in Venice — Forgeries

Chapter 14. In Place of a Conclusion: The Significance and Scope of the Written Word

Appendix I: Latin Transliteration of the Old Cyrillic Alphabet