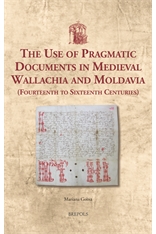 In the region that was to become Moldavia and Wallachia, there are almost no traces of the use of writing for the millennium after the Roman Empire withdrew from Dacia. Written culture surfaces only by the second half of the fourteenth century, after the foundation of state institutions. This book surveys the earliest extant documents, their issuers, and the motives that triggered the development of documentary culture in Moldavia and Wallachia. By the fifteenth century, Moldavians were already accustomed to the use of charters. In Wallachia, noblemen also appealed to written records, but at that stage mainly in extraordinary circumstances. Women could not inherit land, and noblemen requested princely charters confirming a legal fiction that turned their daughters into sons. After the mid-sixteenth century, Wallachia experiences a steep growth in the number of charters issued. In this period of economic and social upheaval, charters proved an extraordinary means for the protection of landed property. Yet neither principality held secular archives — the storage of documents for later use in private hands suggests an early stage in the development of documentary culture.

By covering the ‘birth’ and spread of pragmatic literacy in medieval Moldavia and Wallachia, this book thus fills an important lacuna in what is known about the development of literacy in the later Middle Ages.

The Contents will be added upon publication.