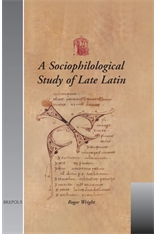 Sociophilology combines traditional detailed philological expertise with the broader insights of modern sociolinguistics. Late Latin is the native language, both spoken and written, of the former Roman Empire in the Early Middle Ages, sometimes also regarded as being ‘Early Romance’. By the thirteenth century Late Latin had split conceptually, from being a single complex living language, into several different living Romance languages, as well as the ‘dead’ language we now call ‘Medieval Latin’. The complex aspects of these developments have been central to Roger Wright’s research for many years; this sociophilological study of Late Latin places many texts, authors, scribes and linguistic developments in a coherent historical, intellectual and educational context. The book is presented in six sections, with four chapters in each: Late Latin, Medieval Latin and Romance; Texts and Language in Late Antiquity; The Ninth Century; Italy and Spain in the Tenth and Eleventh Centuries; Twelfth- and Thirteenth-Century Spain; Sociophilology and Historical Linguistics; followed by a Conclusion, a lengthy bibliography, and an index. The whole presents a vitally important intrinsic component of a thousand years of European cultural history, seen from unusually wide historical and linguistic perspectives.

1. How Latin Came to Be a Foreign Language for All

2. Why the Romance Languages Are Not All the Same

Section B: Texts and Language in Late Antiquity

5. The Role of Priscian

6. The Latin-Romance “Ensemble” of the Seventh Century

8. Rhythmic Poetry and the Author’s Vernacular

10. The Relative Chronology of New scripta and New Languages

11. The End of Written ladino in Al-Andalus

Section D: Italy and Spain in the Tenth and Eleventh Centuries

15. The Glossaries of Tenth-Century Spain: (2) Romance Vocabulary in the San Millán Glossaries 16. In What Language Are the Glosses of San Millán and Silos?

19. Why Judeo-Spanish Was Called “ladino”

21. Comparative, Structural and Sociolinguistic Analyses of the History of the Romance Languages

24. What Actually Changes During a ‘Sound Change’?