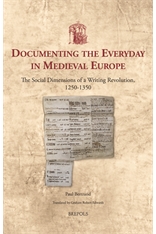 This book explores the complex relations between the written word and medieval society by focusing on the proliferation of administrative and business documents during the so-called ‘long thirteenth century’. It deals with northern France and the area covered by the historic Low Countries, but places these regions in a broader European context and in the general history of literacy.

Based on an exhaustive first-hand analysis of numerous archives and many document types, and featuring over a hundred illustrations, this book presents the reader with a large sample of documentary sources. But it also presents important hypotheses regarding literacy and the sociological dimensions of writing in the Middle Ages. Using codicology, palaeography, and diplomatics, it offers a general outline of a key period in the history of literacy which, with hindsight, can be shown to have transformed the Middle Ages.

Further, as the documents that are discussed were used in everyday life, they also have a significant social dimension. At first, these documents were not backed by a clear legal authority; there were no extant rules, formulas, or structural frameworks to which they needed to conform. Thus they shed new light on the men and women who had to learn to make, keep, and use them.

Chapter 1. The Life-Expectancy of Documents

Chapter 6. Documentary Networks and Lack of System: In Search of Everyday Documents