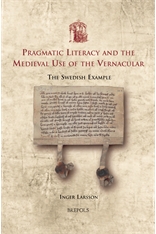 Late twelfth-century Sweden saw the beginning of a development that was to lead to a shift in ways of thinking and acting and to a growth in the uses of literacy. By that time the country had embraced Latin as the language of government and records, in contrast to neighbouring Norway, where the vernacular was used throughout the Middle Ages. The first texts in Swedish of any length were the provincial laws, which were written down throughout the thirteenth century. These laws were of paramount importance for the creation and propagation of a written Swedish language for administrative purposes. These written law-codes created linguistic models as well as opportunities for people who were not conversant with Latin to become part of the literate community. The watershed moment in this process was the issue of the national and town laws in the 1350s. These laws established the position of Swedish as the language of records issued by the judiciary. Thus written documentation was on its way to being integrated into legal procedure, which prior to this time had been overwhelmingly oral.

Larsson argues that the Crown, the expanding royal and local bureaucracy, the editing of the laws in Swedish and the laws’ demands for written documentation in everyday legal transactions were the main driving forces behind the development of lay literacy for practical purposes. The history of pragmatic literacy in Sweden is traced through the use and contents of administrative and judicial documents and the creation of specific terms in Swedish for the various types of deeds and charters in use. Larsson also discusses examples of lingering orality, changes in certain oral ceremonies and the standardization of some types of deeds to facilitate the use for the less skilled as well as possible promoters of the spread of literacy and the existence and importance of certain literate milieus in connection with the editing of provincial and national laws.

Part I: Actors and Literate Milieus

Chapter 3: Private Issuers of Charters
Women as Issuers, Sealers and Landowners – The Role of Witnesses, the Use of Seals and Personal Names

Chapter 4: Summary of Part I

Chapter 8: The Testimony of Terminology

Appendix I: Timeline of Important Events