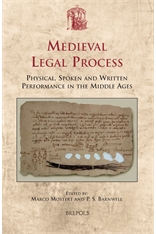 In medieval legal transactions the use of the written word was only one  of  many ways of conducting  business. Important roles were played by the spoken word and by the ‘action’ of ritual. The relationship between ‘rituals’ and literacy has been the focus of much recent research. Medieval societies which made extensive use of written instruments in legal transactions have been shown to employ rituals as well. This has led to investigation of the respective functions of written instruments and legal rituals. What is the nature of legal rituals? If they included oral verbalization, how did the spoken words relate to those of the written instruments that played a role in the same legal transactions? Usually, we only have the written documents to answer these questions, and they are often silent about the rituals and oral elements of the transactions they document. Furthermore, the importance attached to written instruments and rituals may not have been the same at all levels of a society, differing, for example, between princely and local courts. The contributors to this volume discuss fifteen cases, ranging from the early Middle Ages to the eighteenth century, and from England to Galician Rus’.

Bernhard Zeller, “Writing Charters as a Public Activity: The Example of the Carolingian Charters of St Gall”

Karl Heidecker, “Charters as Texts and as Objects in Judicial Actions: The Example of the Carolingian Private Charters of St Gall”

Georges Declercq, “Between Legal Action and Performance: The firmatio of Charters in the Early Middle Ages”

Hagen Keller, “The Privilege in the Public Interaction of the Exercise of Power: Forms of Symbolic Communication Beyond the Text”

Matthew H. Hammond, “Assemblies and the Writing of Administrative Documents in the Central Medieval Kingdom of the Scots”

Stanisław A. Sroka, “Villains, Merchants and the Written Word: A Document of Highland Outlaws from the Polish-Hungarian Border Area from 1493”