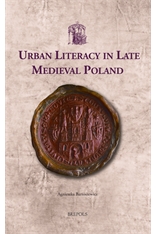 Detailed analysis of the basic features of literacy and urban culture in late medieval Poland.

From the end of the thirteenth century onwards, European towns exhibited a significant increase in the use of writing as a tool for administrative and economic purposes, as well as for social communication. The medieval towns of Poland are no exception to this pattern.

This book surveys the development of the literacy of Polish burghers in the fourteenth and fifteenth centuries, revealing socio-economic and cultural processes that changed the life of Polish urban society. Polish urban literacy is examined according to the reception of Western European urban culture more generally. Town networks in medieval Poland are explained, and the literacy skills of the producers and users of the written word are discussed. Literacy skills differed greatly from one social group to another, it is shown, due to the variety of town dwellers (clerics and lay people, professionals of the written word, occasional users of writing, and illiterates). Other issues that are discussed include the cooperation between agents of lay and church literacy, the relationship between literacy and orality, and the difference between developing literacies in Latin and in the vernacular languages.

Estimates of Alphabetisation in Towns – Factors Encouraging Urban Literacy: State and Church – The State’s Administration and its Influence on Urban Literacy – The Church and Urban Literacy – The gens de savoir in Polish Towns – Levels of Education – Educational Opportunities in Town – The University – Cracow as the Intellectual Centre of Medieval Poland – Town and Gown in the Fifteenth Century – Education and Literacy Skills as an Instrument of Social Advancement and Prestige

Gestures and their Meaning coram iudicio According to Normative Texts – Legal Culture – Notes in Bench Registers as Evidence for Oral Legal Procedures – Interaction between Script and Speech in Judicial Procedures – Transfer of Property Rights – The Frame of Ritual of the Activities of the Municipal Council – Wills and Testaments: A Field of Tension between Orality and Literacy – The Relationship between Latin and the Vernacular Languages – German Language in the Records of Urban Chanceries in the Polish Kingdom – Polish Language in the Records of Municipal Chanceries

Appendix: The Chronology of the locatio of the More Important Towns in the Kingdom of Poland