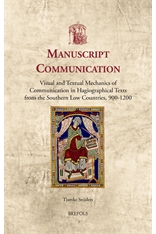 This book investigates how medieval abbeys in the Southern Low Countries used hagiographical manuscripts as a communicative tool.

Ranging from in-depth case studies to discussions of structure and agency in manuscript terminology and layout in the aftermath of New Philology, this book argues that the High Middle Ages witnessed a fundamental process of manuscript diversification and specialisation, which was at the basis of the thirteenth-century revolution in manuscript layout. This led twelfth-century monks to start conceptualising the manuscript as an object with fixed contents, which was to be used and copied as a whole. Consequently, the production and spread of saints’ lives became part of a process of ideological homogenisation among Benedictine monasteries and started a crucial development in medieval literacy.