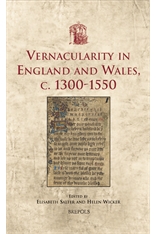 Studies of the vernacular in the period 1300-1550 have tended to focus exclusively upon language, to the exception of the wider vernacular culture within which this was located. In a period when the status of English and ideas of Englishness were transforming in response to a variety of social, political, cultural and economic factors, the changing nature and perception of the vernacular deserves to be explored comprehensively and in detail. Vernacularity in England and Wales examines the vernacular in and across literature, art, and architecture to reach a more inclusive understanding of the nature of late medieval vernacularity.

The essays in this collection draw upon a wide a range of source material, including buildings, devotional and educational literature, seals, and parliamentary and civic records, in order to expand and elaborate our idea of the vernacular. Each contributor addresses central ideas about the nature and identity of the vernacular and how we appraise it, involving questions about nationhood, popularity, the commonalty, and the conflict and conjunction of the vernacular with the non-vernacular. These notions of vernacularity are situated within studies of reading practices, heresy, translation, gentry identity, seditious speech, and language politics. By considering the use and practice of vernacularity, these essays explore whether it is possible to perceive a common theory of vernacular use and practice at this time.

Part I: Reading and Writing

Michael Clanchy, “The ABC Reading Primer: Was it in Latin or English?”

Amanda Moss, “Context and Construction: The Nature of Vernacular Piety in a Fifteenth-Century Devotional Anthology”

Elisabeth Salter, “Evidence for Devotional Reading in Fifteenth-Century England: A Comparative Analysis of One English Poem in Five Manuscript Contexts”

Sarah James, “’Langagis, whos reules ben not written’: Pecock and the Uses of the Vernacular”

Rob Lutton, “’Love this Name that is IHC’: Vernacular Prayers, Hymns and Lyrics to the Holy Name of Jesus in Pre-Reformation England”

Janet Gunning, “Searching for Words: Middle English Vocabularies of the Religious Self”

Helen Fulton, “Literature of the Welsh Gentry: Uses of the Vernacular in Late Medieval Wales”

Gwilym Dodd, “The Spread of English in the Records of the Central Government, 1400-1430”

Jayne Rimmer, “The Language of Property: Vernacular in the Context of Late Medieval Urban Identities”