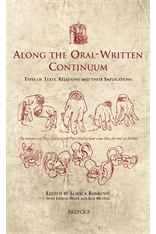 Ever since its introduction in the 1970s, Ruth Finnegan’s notion of the oral-written, or the oral-literate, continuum has served as one of the most effective means of dispelling the dichotomous understanding of the two principal media of communication in the Middle Ages. However, while often casually invoked, the concept has never been made a focus of study in its own right. The present volume is an attempt to place the oral-written continuum at the heart of discussion as an object of a head-on theoretical investigation, as a backdrop to distinct processes of acquisition of literacy in different European regions, and, indeed, as a tool for navigating the rugged landscape of verbal forms, exploring the complexity of oral-literary interrelationships that they manifest. The articles probe the concept with a variety of theoretical and methodological approaches, span diverse texts and genres, and involve a range of European cultural contexts, with special emphasis on Scandinavia and Northern Europe, but also reaching out to various other corners of the continent: from France, the Netherlands and England in the West, over Germany, Bohemia and Poland in the central region, to Serbia and Bosnia in the Southeast.

Part I: Conceptualising the Continuum

Judith Jesch, “The Once and Future King: History and Memory in Sigvatr’s Poetry on Óláfr Haraldsson”

Else Mundal, “How Did the Arrival of Writing Influence Old Norse Oral Culture?”

Bernt Øyvind Thorvaldsen, “The Poetic Curse and Its Relatives”

Åslaug Ommundsen, “A Text in Flux: St. Hallvard’s Legend and Its Redactions”

Lucie Doležalová, “The Charm and Difficulty of a Fragment: Tracing Orality in Cena Cypriani and Summarium Biblie“

Jürg Glauser, “Staging the Text: On the Development of a Consciousness of Writing in the Norwegian and Icelandic Literature of the Middle Ages”

Part III: Of Kings and Peasants: The Orality-Literacy Continuum and the Advent of Administrative Writing

Jan Ragnar Hagland, “On Evaluating ‘the Growth of a Literate Mentality in Late Medieval Norway”

Inger Larsson, “The Role of the Swedish Lawman in the Spread of Lay Literacy”

Bjørn Poulsen, “Using the Written Word in a Late Medieval Rural Society: The Case of Denmark”

Marco Mostert, “The Early History of Written Culture in the Northern Netherlands”