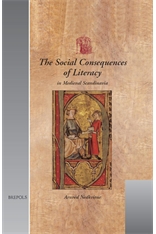 Between 1000 and 1536 Scandinavia was transformed from a conglomerate of largely pre-state societies to societies with state governments. The state increasingly monopolised ‘legitimate’ violence. Church and state used literacy to strengthen social control in central and important areas: jurisdiction, religion and accounting. Written laws made social norms more precise and easier to change, a necessity in an increasingly complex society. The basic social transformations of the period cannot be attributed to increasing literacy alone, but the written word rendered them more peaceful and gradual, and strengthened social conformity and cohesion. Writing in Roman letters was introduced late to Scandinavia (c. 1000 ad); consequently, the transition from orality to literacy is better documented than in many other European societies. The rich saga literature from the twelfth and thirteenth centuries emerged at the time that administrative literacy was introduced. Until the fourteenth century, literacy was mainly promoted by Church and state in their efforts to pacify and control society. Then the literate elites grew, encompassing ever larger groups of officials, clerks, merchants and artisans, many of whom were now educated in town schools. The resulting elite culture prepared the ground for the development of a proto-national identity.

The Scandinavian Background – The European Background – Administrative and Narrative Literacy – Latin and the Vernacular in Medieval Scandinavia – Who was Literate? – Intended and Unintended Consequences of Literacy

Chapter 1. Literacy before 1200: Religious Conformity and a New Elite Identity

The Historical Background – Hagiographies – A Modification of the Traditional, Oral Way of Communicating Norms? – Use of Literacy to Standardize Liturgy and Religious Beliefs – The King’s Administrative Literacy: Foreign Correspondence and Laws – The Annals and the New Understanding of Time – The Rise of the Chronicle as the Narrative of the Whole Elite – Did Literacy Have Important Social Consequences before 1200?