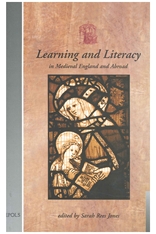 How did people know what they knew, and learn what they learnt? As Derek Pearsall’s introduction makes clear, this is the primary focus of the collection of essays published in celebration of the thirtieth anniversary of the foundation of the Centre for Medieval Studies at the University of York. The learning materials included range from grammar books to mystery plays, and from court records to monastic chronicles, as well as liturgical and devotional texts. But the essays are not only concerned with texts alone, but with the broader and often fluid social environments in which learning took place. Many of the papers therefore question the validity of some distinctions habitually used in the discussion of medieval culture, such as the opposition between orality and literacy, between Latin and the vernacular or between secular and religious.

John H. Arnold, “‘A Man Takes an Ox by the Horn and a Peasant by the Tongue’: Literacy, Orality and Inquisition in Medieval Languedoc”

Pamela M. King, “The York Cycle and Instruction on the Sacraments”

Debbie Cannon, “London Pride: Citizenship and the Fourteenth-Century Costumals of the City of London”